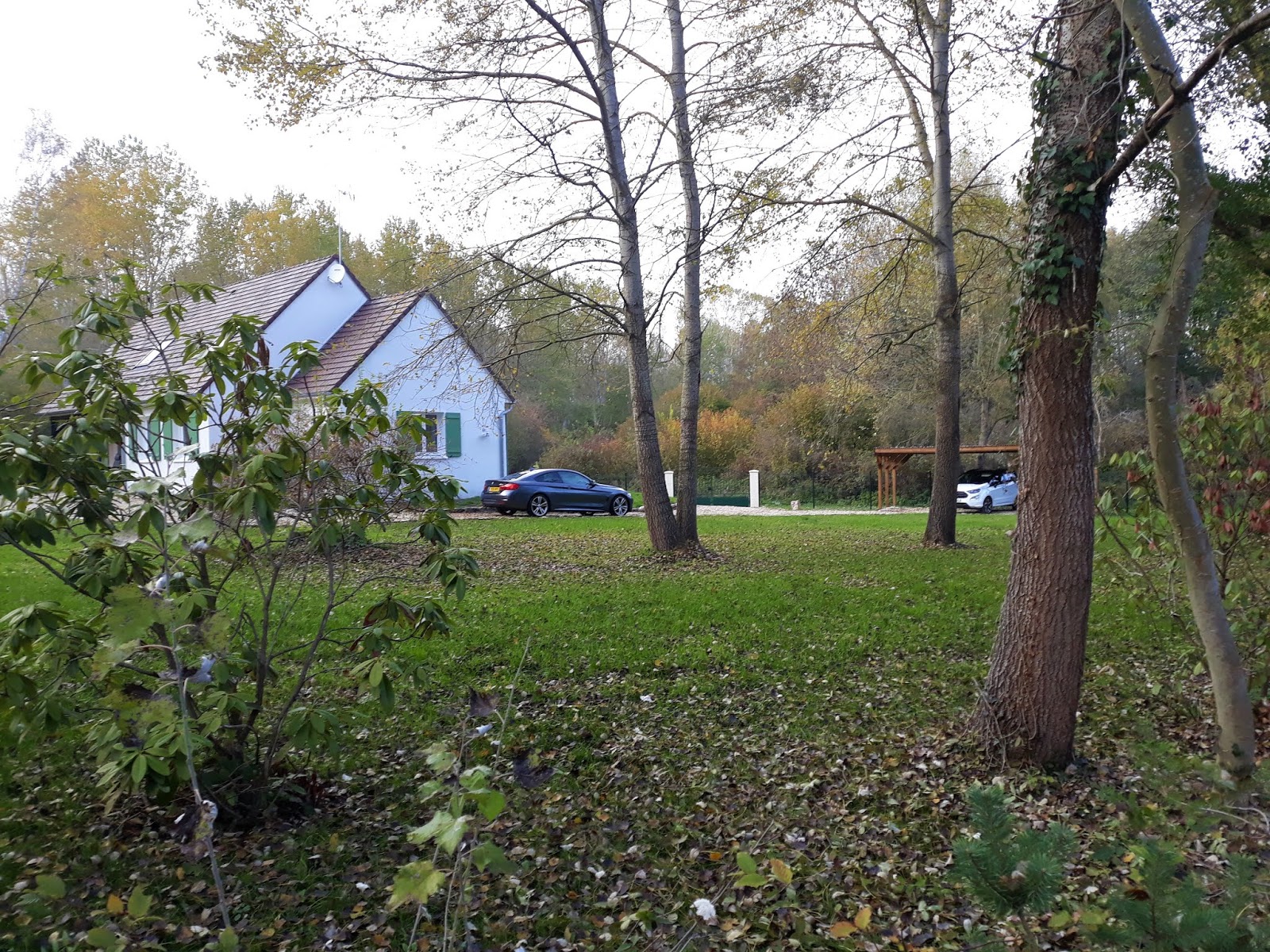 Posting today for the first time in absolutely ages and I'm coming to you from a delightfully quiet, picturesque countryside about half an hour from Paris.

Mark's job is now located in Paris. Commuting was too much and we really missed each other. The constant building work near our home in Spain was really getting to us. It was a no brainer really to find a lovely pad in France and relocate with the furbies in tow. So here we are nestled in the French country-side for the time being.

We're pretty much all settled in, but the whole setting up bills and services has been quite a headache I'm not gonna lie. Simply because of the language barrier. We really need to up our game on learning french, easier said then done. I can remember a bit from school, but that's no where enough to hold a conversation or to set up utility bills. Email and google translate have been a godsend. I did successfully order a macaroon in the bakery the other day though! Winning!

This really has been the most challenging move yet. I'm so pleased we've had each other to lean on. We have had moments of feeling very lost, like little rabbits in the headlights. Times like this you do need support and some friendly words.

The move though hasn't gone as smoothly as it could of.

I think everyone thinks that we are pros at moving, but this time I have been completely lost and have made lot's of packing fails!

As we are trying to sell our Spanish house, we at first were going to move pretty much everything lock stock and barrel. We then thought that because we will eventually, once the house is sold, still move within Spain, it seemed silly to take everything to France just to move it all back again. Plus, we still want to be able to use our Spanish house as a 'holiday home' until it sells. So the plan changed and we decided just to take the essentials for furniture and belongings.

But I tell you what, it is harder packing up half a house then a whole house and trying to predict how much of things you will need, without over packing. We had tons of space left in the vans on moving day and in hindsight I really didn't pack enough. Told you I was completely lost with this move!

So the furniture set off and early the next morning we packed my car to the brim with us and the four furbies.

Now Poppy and Lily are quite used to the travelling thing. Having already flown from Dubai to Madrid then a drive down to Alicante. Then also a few drives in between the UK and Spain. Luna and Rae not that experienced. The longest drive they've had was a 45 minute drive from the rescue center to our house in Spain. Rae always has a jippy tummy just going 5 mins round the corner to the vets, but I thought she should be OK as when they travel they shouldn't eat 12 hours beforehand.

I lined their boxes with puppy pads so if they had a little accident it will be soaked up. Good idea I thought! My mum also gave me a pack of nappy sacks in case I needed to clear up any accidents.

We had a plan in place. An Ibis booked in Poitiers which was about 12 hours into the drive - a good time to stop just as it would be getting dark, so we could have some sleep and be refreshed and ready for the last few hours of the journey the next day. Also Ibis are pet friendly and Poppy and Lily have stayed at that one with us before, so we knew what to expect.

Back to the Sunday morning, we set off.

We literally stopped 5 times in the first 2 hours!

Poppy and Lily were behind us in the car and then Luna and Rae behind them, so we couldn't see them from the front.

We could hear crying and whimpering and very suspicious smells were already filling the car. We had to stop to check on them.

I opened the back door and poor little Luna was standing there in her box foaming at the mouth and also had liquid dripping from one side of her lips.

You could imagine the panic and worry that came over us!

Then I look over to Rae's box and her blanket was all shoved into one corner and she looked so solemn and basically traumatised. OMG what have we done to our babies.

Luna and Rae's boxes luckily have little flaps on the top so I could open and have a look inside. Rae had literally pooped everywhere! Her blanket was covered. I reached in and managed to get it out and pop it in a nappy sack and also scoop out the left over debris too. At this point her puppy pad was still dry so hopefully she would be as comfortable as she could be.

While I was sorting Rae out Mark was consoling Luna through her box and she seemed to of calmed down.

On we went, then the crying and whimpering continued.

Stopped again and Luna had started foaming again at the mouth. After the third time we decided for her to sit up the front on my lap - in her box - it did help and she settled until she pooped. Yep another stop and a nappy sack to the rescue.

We were so relieved once we got to the hotel and thought we would all get a good nights sleep and then only a few more hours to go the next day.

In the room the air con didn't work and we couldn't open the window because of the cat's and then growling and lashing out from Poppy started. We pretty much had to wrestle poor Poppy to get her back in her box, not fun after a mega long drive in a tiny room, boiling hot and cat boxes everywhere! But we managed to get her back in and popped her in the bathroom to settle.

Lily, Luna and Rae were good considering. They wearily sniffed the room and had a few growls, but nothing as aggressive as Poppy was.

I cleaned up their boxes as best I could and made a cup of tea.

Mark and I exhausted just laid on the bed, in our underwear, as we'd forgotten to pack pj's in our overnight stuff and the room was so stuffy, we just couldn't move.

The girls kinda settled and we drifted in and out of sleep for about 3 hours until we were woken by Poppy coughing in the bathroom. Her asthma had flared up and we just looked at each other and we're like, let's pack everyone up and get on with the journey.

Absolutely hanging, feeling grubby and worn out we somehow found the strength - maybe a second wind kicked in - to just get on with the drive.

Half an hour gone and Luna starts whimpering. We stopped at the next service station for petrol and red bull. Luna had been sick again. Back up front on mummy's lap for my little doll.

We reached Paris just in time for the Monday morning rush hour. Eurghh, could this journey take any longer. The sat nav tried to re-route us to avoid traffic. Stupidly we listened to her and ended up going off track through the streets of the city, still in traffic may I add. We then just ignored the sat nav and decided it would be easier to sit in motorway traffic then city traffic! Arghhh!

Our patience was wearing thin as you could imagine.

But we made it.

As we pulled up to our new pad the vans containing our belongings were already there.

The removal guys were snoozing away in their cabs. We waited to get the girls settled indoors and make a cup of tea before we let them know we had arrived.

We set up litter trays, food and water bowls and got the girls safely shut away in a bedroom upstairs.

Very frustrating as the removal guys just kept leaving everything in the lounge and Mark and I did pretty much all the moving and lifting. It was like pulling teeth getting them to just take the mattress upstairs!

Anyway, finally finished, they went. We closed up and let the furbies roam.

They settled quite quickly even though it did take Luna a few days.

The first day we popped out to get some supplies. When we got back we couldn't find Luna anywhere.

Then in the kitchen I spotted my backpack and it was moving. I peered inside and these big eyes looked up at me all scared and sorrowful. Shaking away, my heart was breaking for her.

She was also so scared to come downstairs. For some reason the lampshades were really freaking her out. Poor little thing. They must of seemed like huge spaceships hanging in the air. But she got there in the end and they all seem really happy in their new surroundings.

We haven't had too much time to explore the area just yet. The first weekend we had to pop back to Spain as I had a dentist appointment to have my braces removed! Yay! I'll tell you about that in another post.

Then the rest of the time we seem to be constantly in the Orange shop. First of all we had problems with the internet set up and now the TV we're having problems with!

The joys of moving and setting things up hey, and in another language too!

This probably has been the most challenging move yet, simply because of the language barrier and the bureaucracy! See when we were in Malayisa and the UAE they spoke English and even where we are in Spain, everyone speaks English which makes life so much easier.

But, we are getting there and looking forward to when everything is sorted and we can relax and start to explore and enjoy this beautiful part of Francais.